The launch of institute desires to contribute in the areas of dress culture by activities such as: compiling, translating, collecting specialized documents on costumes of Vietnamese Kinh people and ethnic minorities.

“Sac Lemur” Traditional Dress Show
“Sac Lemur” Traditional Dress Show
Institute of Vietnamese Costumes (IoVC) will base on traditional costumes through historical periods to restore and creatively develop innovative costumes which are suitable for contemporary life. With that meaning, on the launching day, the event recreates a screen in a period of great historical transformation in all aspects: politics, society, language, literature, newspaper and art etc.

From 1930 to 1945, in the context of society changing, there is a great political progress which ended a traumatic colonial past. During that time, Phong Hoa and Ngay Nay newspapers are the two leading publishers in the battle between “The old” and “The new”, when Vietnamese Ao Dai stood in the boundary between feudalism and imported Western civilization, it has witnessed and received multi-dimensional debates from publicity.

“Sac Lemur” had marked an important milestone in the modern innovations of Vietnamese Ao Dai which pioneered by artist Nguyen Cat Tuong, and it has created a trend which including the Western bold details into Vietnamese Ao Dai.

Accidentally or intentionally, “Lemur” in French means a wall. If understood in the first meaning, “Lemur” is the pseudonym of the artist. But on the wider and deeper meaning, “Lemur” reflects the inferiority position of women at the time. It is the Lemur Ao Dai models that set a golden milestone, where women are able to live in modern civilization and have the right to express themselves through their choice of costumes, makeup etc.

The Lemur Ao Dai has now become a symbol of Vietnamese identity and Le Pho – a close friend of Artist Nguyen Cat Tuong has painted the image of women in Lemur Ao Dai in many valuable international artworks. On this occasion, the designer Si Hoang and the best tailors have re-formed Lemur Ao Dai to publicity. Following a half day seminar on costumes of the Khmer, Hoa, Cham and Kinh people, the launching event once again re-affirms the importance of the knowledge base. For more information, please contact: 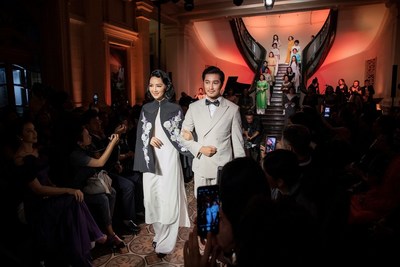